The town of Why, Arizona has a strange name that comes from the shape of the original road junction of Arizona State Highways 85 and 86, which was shaped like the letter Y. This is no longer the case, because the state highway department reconfigured the intersection into a T-shaped connection; the town was not, however, renamed Tee. (To be pedantic about it, from a birds-eye view facing north, the intersection looks more like a Greek letter lambda \( \lambda \). Try selling that name to a small town.) 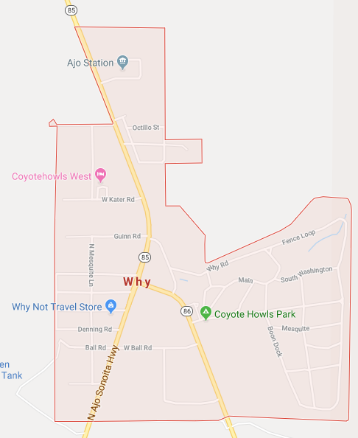 The wye configuration of a three-phase circuit gets its name for similar reasons, because wye-connected loads look like the letter Y in schematic form:

One area of electrical engineering is network analysis — this is basically what all computerized simulation software uses to determine what’s going on in an electrical circuit. An important idea of network analysis is that you can consider any linear circuit network as a black box when viewed from its terminals. For the three-terminal circuit: 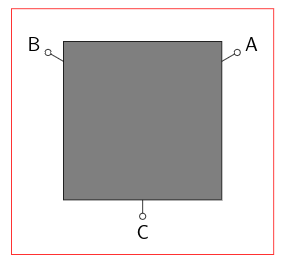 What can we say about this? There are three currents into the three terminals, \( I_A, I_B, I_C \), and three voltages \( V_A, V_B, V_C \). Assuming we don’t allow any unipolar charges to develop, we know \( I_A + I_B + I_C = 0. \) Also, we can use any of the terminals as a fixed voltage reference. This means for a linear circuit with no internal voltage / current sources,

for some 2 × 2 matrix \( \mathbf{Z}. \) We don’t care whether it’s a wye or a delta circuit or something else; we can describe it completely by its externally-observable impedances. These may be a complicated function of frequency, but it’s still a 2 × 2 matrix.

It also means that if we have a wye circuit with some known values \( Z_A, Z_B, Z_C \), we can determine an equivalent delta circuit with values \( Z_{AB}, Z_{BC}, Z_{CA} \) and there’s no way to distinguish the two from their externally-measurable behavior.

There’s a fairly simple wye-delta transformation, shown by A. E. Kennelly in 1899 in Electrical World and Engineer.

We can derive it ourselves with a little bit of Grungy Algebra. For convenience I’m going to use single letters a through f as follows:

Suppose we leave terminal C open-circuited. Then the impedance between A and B is \( a+b \) for the wye and \( d\parallel (e+f) = \frac{de + df}{d+e+f} \) for the delta. These are equal if the circuits are equivalent. We can come up with similar equations for the other two cases of open circuits:

Add all three equations and divide by two and we get

This handles the conversion from delta to wye.

Add all three equations and divide by two to get

and take reciprocals to get

In terms of the original impedances in the wye and delta diagrams, we have the delta to wye conversion:

and the wye to delta conversion:

Then the equivalent delta circuit with values, in ohms, is

This case (the “approximately isosceles” case if you envision the delta case as a triangle with side lengths proportional to impedance) is interesting in a couple of ways:

Then the equivalent delta circuit with values, in ohms, is

These equations tell us that the equivalent delta circuit impedances, in ohms, are

And going the other way, we have

If we connect one of the terminals (for example, terminal C) to a circuit ground, then these are traditionally drawn orthogonally rather than at 120° angles, and the wye and delta configurations are known as T (or tee) and π (pi) networks:

The black-box equivalent is a two-port network. Now, technically a two-port network has no common voltage (each port could be galvanically isolated from the other), but in many circuits the negative-side terminals are common. Let’s label the voltages and currents:

and presumably, if you’re willing to go through the Grungy Algebra, multiplying the two matrices \( \mathbf{Y}\mathbf{Z} \) will give you the identity matrix.

We can spot-check this for the impedances in Example 4:

This means that \( \mathbf{Y}=\mathbf{Z}^{-1} \) is also positive semidefinite or positive definite.

Maybe one of the linear algebra fanboys can tell me what this actually means in terms of circuit behavior. Probably something to do with the fact that the energy dissipated in these impedances is always nonnegative or positive.

Okay, enough of the algebra. These wye, delta, tee, and pi networks and their transformations have real applications in circuit analysis and synthesis. The analysis applications are straightforward; you can swap between wye/delta or tee/pi equivalents whenever it makes it easier to analyze a particular circuit. As far as synthesis goes, sometimes one of the equivalents is easier to utilize than the other. Here’s one example:

I’m sure there are some other applications to discuss, such as the Twin-T notch filter, but none of them are familiar enough to me to discuss here.

We talked about wye, delta, tee, and pi circuits including: