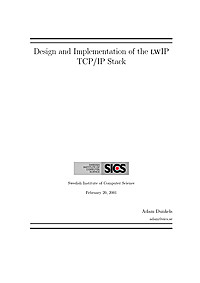 Design and Implementation of the lwIP Stack

LwIP is an implementation of the TCP/IP protocol stack. The focus of the lwIP stack is to reduce memory usage and code size, making lwIP suitable for use in small clients with very limited resources such as embedded systems. In order to reduce processing and memory demands, lwIP uses a tailor made API that does not require any data copying. This report describes the design and implementation of lwIP. The algorithms and data struc- tures used both in the protocol implementations and in the sub systems such as the memory and bu®er management systems are described. Also included in this report is a reference manual for the lwIP API and some code examples of using lwIP.