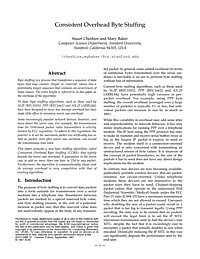 Byte stuffing is a process that transforms a sequence of data bytes that may contain ‘illegal’ or ‘reserved’ values into a potentially longer sequence that contains no occurrences of those values. The extra length is referred to in this paper as the overhead of the algorithm. To date, byte stuffing algorithms, such as those used by SLIP [RFC1055], PPP [RFC1662] and AX.25 [ARRL84], have been designed to incur low average overhead but have made little effort to minimize worst case overhead. Some increasingly popular network devices, however, care more about the worst case. For example, the transmission time for ISM-band packet radio transmitters is strictly limited by FCC regulation. To adhere to this regulation, the practice is to set the maximum packet size artificially low so that no packet, even after worst case overhead, can exceed the transmission time limit. This paper presents a new byte stuffing algorithm, called Consistent Overhead Byte Stuffing (COBS), that tightly bounds the worst case overhead. It guarantees in the worst case to add no more than one byte in 254 to any packet. Furthermore, the algorithm is computationally cheap, and its average overhead is very competitive with that of existing algorithms.