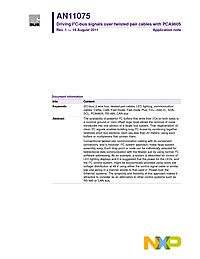 The availability of powerful I2C buffers that drive their I/Os on both sides to a nominal ground or ‘zero offset’ logic level allows the removal of noise introduced into one section of a larger bus system. That ‘regeneration’ of clean I2C signals enables building long I2C buses by combining together relatively short bus sections, each say less than 20 meters, using such buffers or multiplexers that contain them. Conventional twisted pair communication cabling with its convenient connectors, and a ‘modular’ I2C system approach, make large system assembly easy. Each drop point or node can be individually selected for bidirectional data communication with the Master just by using normal I2C software addressing. As an example, a system is described for control of LED lighting displays and it is suggested that the power for the LEDs, and the I2C control system, might be economically provided using ‘extra low voltage’ distribution at 48 V using either the control signal cable or similar low cost wiring in a manner similar to that used in ‘Power over the Ethernet’ systems. The simplicity and flexibility of this approach makes it attractive to consider as an alternative to other control systems such as RS-485 or CAN bus.