I recently had to pick a slew rate for a current waveform, and I got this feeling of déjà vu… hadn’t I gone through this effort already? So I looked, and lo and behold, way back in 2014 I wrote an article titled Slew Rate Limiters: Nonlinear and Proud of It! where I explored the effects of two types of slew rate limiters, one feedforward and one feedback, given a particular slew rate \( R \).

Here was one figure I published at the time: 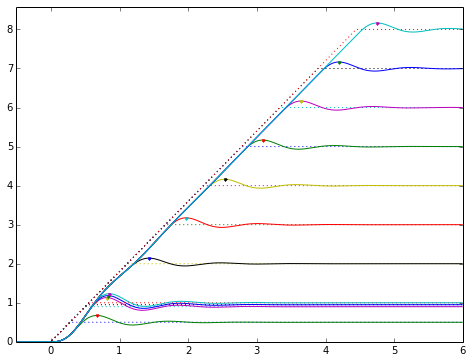 This shows a second-order system response for various step sizes that have been fed through a feedforward slew rate limiter. You’ll note the slew rate is constant — again, the idea was to explore the implications of using some given slew rate.

Great! That’s a big part of why I write these articles, so when I figure out how to deal with some little aspect of circuit design or signal processing, I can file it away on EmbeddedRelated, and then when Future Me scratches his head and looks around online… hey, look, there’s another article Jason wrote on the subject already… I’d better thank this guy, as he’s saved me a lot of unnecessary effort.

But now in 2022, I need to choose a slew rate for a fixed step size. So today I’ll show you a quick look at that and come up with a fairly easy rule to follow.

To be more precise:

I’m not going to bother with an analytical solution today; that’s possible, but sometimes I just like working with numerical analysis to find an empirical solution, and feel like leaving the Grungy Algebra for another day.

I had to reinstall Anaconda Python recently to deal with a library issue, so I’ve finally taken the leap to use Python 3 on my home computer. (I went through this pain in the last two years at work. It’s not too bad — like ripping off a bandaid — as long as you don’t have a lot of legacy programs to deal with, and even then, you can always run Python 2 if you want)

My advice if you’re going through this:

Okay, enough of that little digression. Let’s run some code! OK, great! Just about what we predicted!

If you’re adding a slew rate limiter to help reduce overshoot in a second-order system with time constant \( \tau \) and damping factor \( \zeta \) (this assumes that you aren’t tuning it more conservatively to increase \( \zeta \) and reduce the overshoot, for other reasons), then a good choice of slew rate limit is \( R = \dfrac{\Delta x}{2\pi\alpha\tau} \) with \( \alpha\approx 1 \) for a step input of \( \Delta x \).

Got an interesting signal processing issue that you’d like to learn more about? Let me know!