This is part 2 of my playing around with AVR microcontrollers. Last time, I had a basic setup which could program an AVR using the Arduino ISP. I used it to drive a simple 7-segment, multiplexed 4-digit LED display. This is a follow up where I try out some of the other features the ATTiny24A has to offer. I also decided to invest some money in an AVR Dragon programmer/debugger so I'll go over some basic playing and setup with this device. I'll also discuss some of the problems and pitfalls I've encountered along the way.

The AVR Dragon is a decently low-cost AVR programmer/debugger. It supports a wide variety of programming and debugging capabilities (as far as I know, every AVR protocol is supported). This includes the high-voltage programming capabilities used for fixing fuse problems with certain AVR devices. Even though the product is made by Atmel, it comes in a very hobby-like package. The device doesn't come with any cabling required to use it, nor does it come fully populated with all the headers. It doesn't even come with a case, you just get a bare PCB device.

Despite these faults, it isn't too difficult to setup the device to use. What other items you will need (including what it's used for):

These are the parts I'm using along with a complete BOM list. Basically I went onto DigiKey and found parts which would meet my requirements, while trying to minimize cost. I had an old USB A-B cable around so I didn't need to purchase a new one. I wanted my cables and AVR Dragon headers to be gold-plated to help with long-term durability and corrosion/chemical resistance. However, you can probably just as easily get away with tin-plated connectors/headers at a slightly lower cost. Note that I chose not to populate the prototyping area yet as I'm still unsure which path I want to take with this area (ZIF or dual DIP sockets on both sides). For now I'm going to stick prototype programming packages into a breadboard I have. You'll also need some wiring, I'm using 22 AWG solid core because that's what I have, but a stranded core would probably work better for the cables because they're more flexible and are less prone to break as a result of bending/movement. Also, I've seen recommendations that these cables should be kept relatively short, preferably under the 6" range (~150mm).

The software I'm using to write my AVR programs is Atmel Studio 6. This is the latest official tool provided by Atmel and uses the Visual Studio 2010 core. As a result, it's only available on Windows. Despite the fact that it uses the Visual Studio 2010 core, Atmel provides the tool free of charge. Note that even though I'm using Atmel Studio to program/debug, this isn't the only choice. Luckily, the AVRDude tool I used last time is compatible with the AVR Dragon.

the Atmel website seems to be lacking documentation on how to setup the AVR dragon. They direct you to the AVR Dragon product page to download software front-end and USB drivers, but there isn't actually any download link. Turns out what you need to do is download Atmel Studio to get the USB drivers. Also, the first time I plugged the AVR Dragon in Windows did some driver setup/installation.

Luckily, upgrading the AVR Dragon firmware is a fairly painless process to do with Atmel Studio. Upgrading the firmware allows you to take advantage of bug fixes, support for new chips, and occasionally new functionality. To do this, plug in the AVR Dragon, start up Atmel Studio and in the top menubar, go to Tools > AVR Tools Firmware Upgrade. The updater will work for a little while, and eventually it will ask you to power-cycle the device. Simply unplug/plug the AVR Dragon and you're good to go with the latest and greatest firmware.

Testing Out the Setup

AVR interrupts are "called" from the interrupt jump table. There are a variety of external and internal interrupt sources and each source can have a unique interrupt handler. To create an interrupt handler you use the ISR macro, which takes the interrupt vector entry you want to handle. You can refer to the datasheet to find the appropriate address for which interrupt you want (for the AVRtiny24A it's on Table 9-1), or you can use the AVR Libc documentation. Here's my interrupt handler:

There are a few important things to note:

This is the rest of my code. It initializes the correct settings and then infinitely loops and samples temperature data.

Programming and Debugging a Target

Programming and debugging of the AVRTiny24A turns out to be remarkably troublesome. The main problem is that the debugWire and ISP interfaces are mutually exclusive. Namely, if a chip has the DWEN fuse enabled, you can only use debugWire. If SPIEN is enabled you can only use the SPI programming interface. Atmel Studio has the ability to toggle between the two, but there are some caveats with this. Luckily, if you're debugging your programs in general you don't need to switch back and forth between the two, the debugWire has basic programming capabilities which will allow you to compile a program and on starting debug will automatically upload the program. I don't know if the program is permanently stored on the target device or if it's uploaded only to the AVR Dragon, but it's quite usable for debugging.

The downside is that as far as I can tell, debugWire cannot modify the EEPROM or other fuse bits (other than toggling between debugWire and ISP if debugWire is enabled), so you will need to switch back to ISP mode to do these things.

To program a chip from Atmel Studio, compile/recompile your code. Plug the AVR Dragon into your computer, choose the tool, device, and interface. Click Apply.

In the memories tab you can read/write the flash or EEPROM. Find the Intel hex file (.hex) or an Executable and Linking Format (.elf) you want to program the chip with. In general you should erase the flash before programming because of the way flash memory works. There's also a tab for modifying the fuse bits.

If you run into problems programming the target device, most likely this is because of the AVR Dragon's weak drive strength. Try reducing the cable lengths, ISP programmer clock speed, or both. Alternatively, Kasper Pedersen has a nice Dragonhide piggyback solution which handles several problems with the AVR Dragon such as ESD protection, cable termination, and transmission strength. 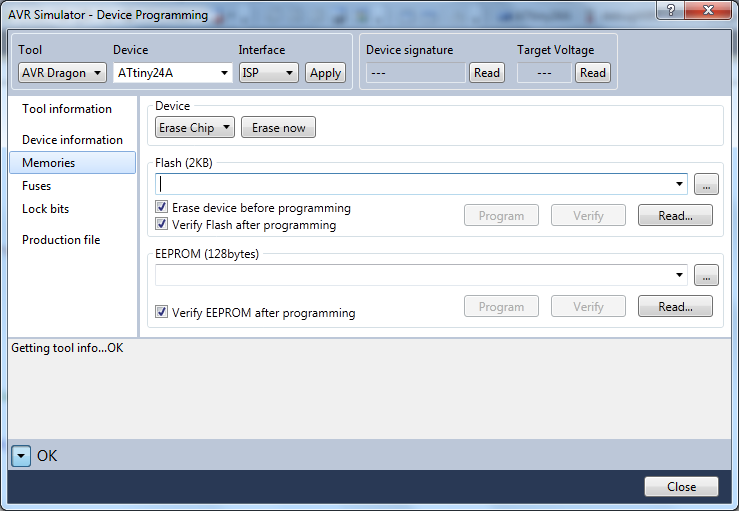 To setup device debugging, in the top menu open Project > {Project Name} Propertiess.... Go to the Tool tab and select the AVR Dragon as the programmer/debugger using the debugWire interface. You can now launch the project debugger. On launch, the debugger will ask you if you want to enable debugWire (if your device is currently in ISP mode). Choose yes and then you're good to go.

Switching back to ISP mode is a bit more of a challenge. There is a nice menu item in the top menu under Debug > Disable debugWire and Close. In theory choosing this option will reset the fuses so ISP mode will work again. However, there is one caveat: when the debugWire is being disabled, power is cut to the 5V source on the AVR Dragon. On externally powered targets you should be fine, but if you're using this 5V source to power your circuitry, you'll have some problems as the debugWire can't be disabled. Be careful with inrush current, though. I tried using the AVR Dragon on the LED circuit I built last time, but with a larger bulk decoupling capacitance and the chip either didn't power on or was very finicky.

So in conclusion, the AVR Dragon is a decent little tool for programming and debugging. There are several things I don't like about it, namely the weak drive problems, the device disabling the 5V power circuit when trying to program, and the power problem with what I assume is caused by inrush current. Sadly, it is the only official Atmel tool which supports high-voltage programming for when you ruin a chip's fuses. It's also decently cheap, at ~$65 to get everything you need to use the device. I suppose the argument can be made that high-voltage programming isn't necessarily the best way to go if you brick a chip as you can easily replace it for a dollar or two, but oh well. I don't particularly like the form factor, I really like the look of the PICKIT series of programmer/debuggers and the way they device can easily be used as a R&D tool as well as be used in field maintainance. I don't have a PICKIT and don't have any experience with the PICKIT/PIC microcontrollers so I can't say exactly how the two compare, but I do want to play around with Microchip's microcontrollers sometime in the future.