Arduino robotics is a series of article chronicling my first autonomous robot build, Clusterbot.  This build is meant to be affordable, relatively easy and instructive.  The total cost of the build is around $50.

What is a robot?

There are many different definitions for the word robot.  My personal opinion is that for a machine to be considered a robot, it needs to be able to sense and react to a dynamic environment, with little or no human intervention.  Based on this definition, Clusterbot is still a machine - now we are going to turn him into a robot. 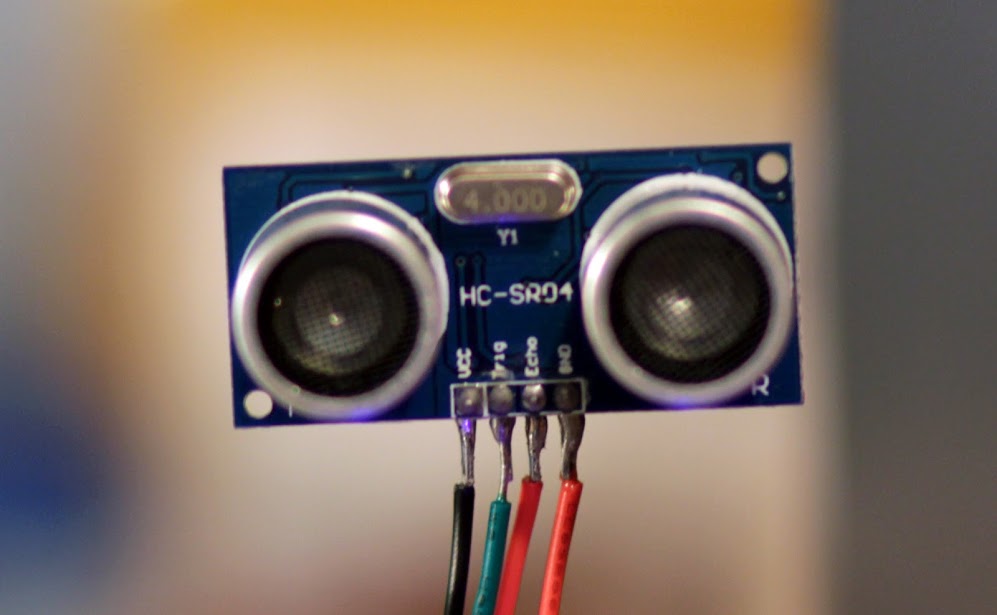 I decided to go with the HC-SR04 Ultrasonic sensor.  Functionally, the HC-SR04 is roughly the same as the Parallax PING sensor.  These sensors emit a 40KHz pulse when an input is provided to the trigger pin.  The sensor measures the amount of time it takes for the 40KHz signal to come back, then outputs a variable-width pulse proportional to the time measured.  In the case of the Parallax PING, the trigger and return pulse share the same pin.  On the HC-SR04, the trigger and echo pins are separate.

The HC-SR04 sensors are about $3 shipped on eBay.  Parallax PING sensors are $29.99.  I've never used the PING sensor, but I've used several of the HC-SR04's.  The only complaint I have is the maximum range.  The published range of the HC-SR04 is 450cm.  I've been able to achieve consistent and accurate results out to 100 cm (about 3.5 feet).  Talking to a few others on Google+, 100cm seems to be the typical range.  If maximum distance is important, the PING has a published range of 300cm.

Using the HC-SR04 sensor is pretty simple once you install the required library to the Arduino IDE.  The library I used is available for download here: HC-SR04 Arduino Library.  You may also find this info from Arduino.cc useful: how to add libaries to the Arduino IDE.

Here's a simple bit of Arduino code to test the HC-SR04 sensor.  Output will be to the serial monitor in the Arduino IDE.  Make the following connections on your Arduino and HC-SR04:

Now upload the following code to the Arduino:

Once the code is uploaded, you can open the serial monitor on the Arduino IDE on your computer.  You should see the distance the ultrasonic sensor is measuring, updated 10 times per second.

Adding the HC-SR04 to Clusterbot

Now we are going to add the HC-SR04 to Clusterbot.  Also adding an LED and a Speaker for fun.

The test run was a success!  I especially liked how well Clusterbot performed when completely surrounded.  He continued to spin on his axis until I gave him a way out, which he took at the first opportunity.  I kept the test code really simple - either turn left or go forward.  I've found it's important to keep a system as simple as possible when adding a new component.  Adding to much to a system at once makes it more difficult to troubleshoot the entire system when things don't go as planned.

There are a few things I would do differently if I were building Clusterbot now: