Like any craftsman, I have accumulated quite a few tools during my embedded software development career. Some of them proved to me more useful than others. And these generally useful tools ended up in my Embedded Toolbox. In this blog, I'd like to share some of my tools with you. Today, I'd like to start with my cross-platform Programmer's Calculator called QCalc.

I'm sure that you already have your favorite calculator online or on your smartphone. But can your calculator accept complete expressions in the C-syntax, which you can cut-and-paste directly to and from your embedded code? How many buttons do you need to push to see your result in decimal, hex and binary? Well, QCalc can do this with less hassle than anything else I've seen out there. I begin with describing QCalc features and then I tell you how to download and launch it.

The most important feature of QCalc is that it accepts expressions in the C-syntax – with the same operands and precedence rules as in the C or C++ source code. Among others, the expressions can contain all bit-wise operators (<<, >>, |, &, ^, ~) as well as mixed decimal, hexadecimal and even binary constants. QCalc is also a powerful floating-point scientific calculator and supports all mathematical functions (sin(), cos(), tan(), exp(), ln(), ...). Some examples of acceptable expressions are:

NOTE: QCalc internally uses the Tcl command expr to evaluate the expressions. Please refer to the documentation of the Tcl expr command for more details of supported syntax and features.

Automatic conversion to hexadecimal and binary

If the result of expression evaluation is integer (as opposed to floating point), QCalc automatically displays the result in hexadecimal and binary formats (see QCalc GUI). For better readability the hex display shows a comma between the two 16-bit half-words (e.g., 0xDEAD,BEEF). Similarly, the binary output shows a comma between the four 8-bit bytes (e.g., 0b11011110,10101101,10111110,11101111).

QCalc allows you also to define any number of your own user variables. To set a variable, you simply type the expression =alpha in the user input field. This will define the variable alpha and assign it the value of the last computation ($ans). Subsequently, you can use your alpha variable in expressions by typing $alpha (note the dollar sign $ in front of the variable name). Here is example of defining and using variable $GPIO_BASE:

Note: The names of user variables are case-sensitive.

Expressions that you enter into QCalc might have all kinds of errors: syntax errors, computation errors (e.g., division by zero), undefined variable errors, etc. In all these cases, QCalc responds with the Error message and the explanation of the error:

QCalc is included in the open source QTools Collection, which you cad freely download from SourceForge or GitHub. Once you install QTools, QCalc is located in the sub-directory qtools/bin/ and consists of a single file qcalc.tcl. To launch QCalc, you need to open this file with the wish Tk interpreter.

NOTE: The wish Tk interpreter is included in the QTools Collection for Windows and is also pre-installed in most Linux distributions.

The wish Tk interpreter is conveniently provided in the same qtools/bin/ directory as the qcalc.tcl script. The directory contains also a shortcut qcalc, which you can copy to your desktop. 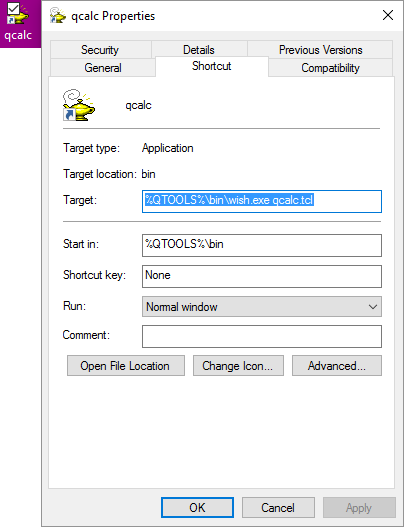 Most Linux distributions contain the Tk interpreter, which you can use to launch QCalc. You can do this either from a terminal, by typin wish $QTOOLS/qcalc.tcl & or by creating a shortcut to wish with the command-line argument $QTOOLS/qcalc.tcl.

Just cross-posted this blog on DSPRelated as well as I believe it could be of interest to DSP engineers.  Thanks for writing this Miro and publishing it here.

Lots of comments about this article on Reddit: https://www.reddit.com/r/programming/comments/6kba...

As anticipated in the blog post, people mostly offer their own favorite tools. However, the challenge still stands, because none of the suggested tools allows a developer to enter complete expressions in the C-syntax and obtain automatic conversion to hex and binary with less hassle than QCalc.

I cant find the qcalc tool in the referenced locations on Github or Sourceforge, QPC_5.9.3 is what I downloaded from sourceforge. Could you check the links and update if nessecary?

Thanks for your interest.

You are apparently downloading QPC_5.9.3, whereas QCalc is included in the QTools collection. Please use the web links provided in the blog post and not the default download component offered by SourceForge. Here are the links again:

Thanks, I have got the correct package from your Sourceforge link. The Qtools link on Github dosent seem to have Qcalc though.

Looks like a wonderful tool. Wish I could access it. Went to both links you gave PikHal and both contain the same images Neither of which contains QCalc or anything link wish in any directory.

Great tool. A must have for every embedded engineer. The UI is very minimal, yet offers maximum benefits. Thanks Miro Samek.

Dr. Miro Samek is the CEO of Quantum Leaps (state-machine.com) and an expert on programming modern real-time embedded (RTE) systems. He is the author of practical books and articles about UML state machines, active objects (actors), and real-time embedded frameworks (RTEFs). Since 2013, Miro has been teaching the popular “Modern Embedded Systems Programming” course on YouTube. His industry experience ranges from GE Medical Systems to Silicon Valley companies specializing in GPS technologies. His software continues to power billions of embedded devices. Miro earned his Ph.D. in nuclear physics at GSI (Darmstadt, Germany).