Funny or Not Funny?

I am well known in my entourage for not always having the best judgement with my humor and sometimes crossing a line and making people cringe.  I know I inherited this flaw from my father (thank you dad).

In my efforts to promote the upcoming Embedded Online Conference, I created an ad that uses Coronavirus humor and I would appreciate your feedback as whether posting the following image on social medias could possibly offend/backfire: 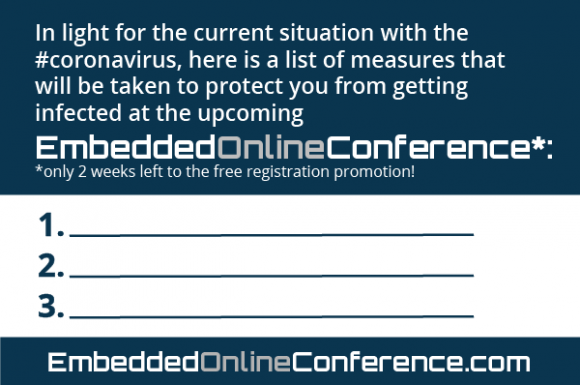 Obviously, the idea here is to highlight the fact that the conference is online so no special measure needs to be taken.  With the cancellation of MWC 2020 and Embedded World getting hit by many vendors withdrawing from the show, I thought it could be a good idea to ride the current coronavirus 'buzz'.

Many thanks in advance for your insights!

Maybe not "offend" per se, but perhaps "upset"? One of my co-workers comes from China, and his entire family is "trapped" in the quarantined region. They're fine for now, but it's worrying.

Also: I'm a bit slow and I didn't get the "online" joke until you pointed it out. No doubt, there are one or two others like me who won't get the joke. You may want to take that into account. Perhaps something that does not refer to the Corona Virus directly, such as: "Unlike the World Mobile Congress, the Embedded Online Forum will not be cancelled..."? And emphasize the "Online", perhaps?

Hope this helps you arrive at a suitable decision.

While I do appreciate the humor and the line of jokes that could address computer vs. biological viruses, this is unequivocally bad taste. People have died, tens of thousands are sick, and millions are sick with worry. It's not over, and has the potential to get worse, with ripple effects across the world in multiple dimensions.

I would suggest something more even-handed: "While other embedded conferences have been canceled due to concerns about the coronavirus, the Embedded Online Conference will be held May 20, 2020. There are just 2 weeks left to the free registration promotion!"

People are dying -- there's no way you can make that funny.

There is no way you can make an ad using this topic that won't end up shooting yourself in the foot.

Even if you played it straight and said "Attending an online conference means you don;t have to travel and you don;t have a chance of meeting someone who is infected," you'll be seen as trying to benefit from something that is causing untold suffering -- and something that still has the potential to spread (possibly mutate) into a world wide pandemic.

I am very glad that I had enough instinct to ask you guys for your wisdom before posting.  Clearly I was heading in the wrong direction and would have offended/upset many people.

I will think of something else and stay clear of pandemic humor.

Thanks also to @CustomSarge for your take on this.

You're instinct was good, because it made you stop and think, and then ask for a second opinion! So you're able to counteract your inheritance!

If you post "The sun will set in the west today" then you will offend at least three people.

Back in the days of the old American west everybody wore a gun. It was a very,very polite society since nobody wanted to inadvertently start a fight.

The internet is shaping us into a very subdued society. You could reply to something but remain silent because you don't want to deal with all the drama.

Read "True Names" by Vinge if you want to see where we are heading.

Every time someone/comedian thinks about this kind of humour, stop, would you tell a joke about 911 in person to the surviving members of a persons family. NOPE!

As it is, there is every reason to believe that the communicability, virulence and sheer numbers involved that is currently being reported officially by a RED COMMIE PIG DOG (Communist) regime are patently false.

Whole cities are locked down. Wuhan, a city with a population of 11 millions people is under quarantine. What would Americans do/think if New York City (8 million people) were completely cut off from the rest of the continental US of A, under the premise of a quarantine. For one, thing, it couldn't be done, could it?

The fact that multiple huge cities have been completely shut down should tell everyone the very serious danger of this virus.

I lived and worked in Shanghai, Wuhan, Nanjing, Guangzhou and Beijing in 80's. These cities are ghost towns, so are the subways and buses.

The SARS virus traveled through the plumbing in a Hong Kong apartment building. While people were sitting on the throne and reading, the virus was coming through their plumbing and infecting them.

A Pandemic has not been seen by the world since 1918, the so-called Spanish flu. Estimates are between 50 and 100 million people killed worldwide, and they didn't have fast ships, planes, cars, buses and trains all over the place.

China is quite literally trying very hard to prevent a worldwide pandemic and I'm surprised that the ORANGE MAN hasn't been clued in yet.

SARS lived on surfaces for many hours. Touch and elevator button, it's contaminated. Next, everyone else on the same floor becomes contaminated, same button.

Unlike SARS, people are carries of COVID-19 without physicals signs, such as elevated body temperature, sweating, coughing and more.

Don't do it, find you humour somehwere else.

> Constructively it's a vote for online "gatherings" of any sort. When I went independent in '91, my illness probability plummeted, since I was notably absent interaction with the great microbial / viral distributor - young children and their parents.

> There are tradeoffs, in removing the "press the flesh" and "eye to eye" aspects. I feel that's where different methods of online communication can step up. Not to replace, but to augment when distance or strife (etc) make it impractical, let alone hazardous.

Oh, you may just be asking the wrong person on deviant humor - "What did Christa McAuliffe tell her husband on leaving for the Challenger mission - "You feed the dog, I'll feed the fish"" --- Sick - YES, Funny - pends your sense of humor...

Since we're being politically incorrect... here's my 2p worth.

Not just with humour, but with almost everything now, it used to be the opinion of the majority which held sway. Now we must go out of the way to ensure we don't upset the minority - no matter how acceptable the majority might find things. Notice that I have not given any opinion on whether I agree or disagree with my own statement. I'll wait to hear what the minority of people think first.